Wilt Doover is a character and is the founder of Port Doover and the creator of Loopy Loops cereal. He first appeared in "Loopy Loops". He's been frozen in a block of sugar for centuries, which is located in the Loopy Loops Factory. Given this immunity to time, he'll become aware of the loop, when defrosted.

Wilt Doover is the man who founded Port Doover and invented Loopy Loops cereal. He became famous for both of these things and is well reknowned everywhere in Port Doover, even today. One day, he invented robots that would do all of humans' work for them, but they went rogue and froze him in a block of sugar. Being such an important man, they decided to keep him there, so that he'd never die and he still resigns there today.

Wilt Doover made his first physical appearance in "Loopy Loops", where Luc and Theo unfroze him. Wilt proved his awareness to the loop, claiming to have tried to invent it in the past. Upon his new freedom, he invented a portal that create robots for every citizen of Port Doover, so that no one would have to work again. Luc wasn't on board with the idea, but Theo disagreed, until Wilt replaced Luc with a robot and then threatened to replace him too. Luc and Theo shut down the robots and gave Port Doover it's freedom back, which they hated. Luc and Theo realized they made a mistake, but it was too late to return. Wilt said that the town just wasn't ready for his invention yet, so he froze himself again, waiting for a future century, where they would be.

Wilt Doover is a thin man with gray hair, black eyebrows and thin mustache. He wears a gray business suit. In color, Wilt Doover has Caucasian skin, black hair, and a black suit, and a purple tie.

Wilt Doover is a happy-go-lucky man, with an inventive mind and the intent to make everyone happy. He is the proud creator of Loopy Loops cereal and founder of Port Doover. He's made history and is still well-beloved to this day and can often be described as being "ahead of his time". His only shortcoming is his prejudice toward clowns and his intent of putting them to hard labor. This problem was solved, when he replaced human clowns with robots. However, this actually turned out being seen as a bad thing for the clowns, making them feel worthless. So, they froze him in rock candy and put an end to his work. This would be one of the many misunderstandings given to him by others. People often see Wilt as a villain for his robot replacement idealism, and he was successfully defeated by Luc and Theo in his debut episode, before they came to the realization that this plan was the ticket to Utopia. Wilt is also very patient and wise, understanding how even decades into the future, society was just not ready for his solution to all life's problems, so he froze himself in rock candy again and awaited a future, where they would. 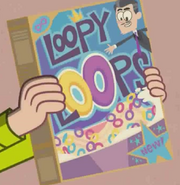 Wilt Doover in color, as seen in "11 Minutes to Lame".

Add a photo to this gallery
Retrieved from "https://loopedtvshow.fandom.com/wiki/Wilt_Doover?oldid=6621"
Community content is available under CC-BY-SA unless otherwise noted.