Tiny Fishbrain is a robot invented by Theo in the episode "She's All Bot". He is modeled after Luc and serves as a boyfriend for Dragonface Pukebutt.

Theo created Tiny Fishbrain and modeled him after Luc, making him a boyfriend for Dragonface Pukebutt. Fishbrain and Pukebutt fell in love with each other and became a beautiful romantic couple, until the loop then wiped out of existence. 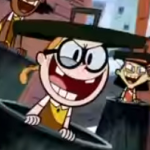