Sarah Doover is the pretty, perfect, popular girl at Port Doover Elementary. She is always accompanied, by her twin sidekicks Kelly and Kelli. Due to a singing audition, happening on Friday, she's saving her voice by spending the week, without saying a single word, making this stick for the entire series. She communicates by texting her thoughts to one of the twins, so that they may speak for her. The one time she spoke, she was voiced by Alyson Court.

In "Dodge This", Sarah was traumatized when Kyle's face had been pelted by a series of dodgeballs thrown by Jesse, and ordered Jesse to fart-box himself as punishment.

In "She's All Bot", Dragonface Pukebutt caused a butterfly effect, where Luc and Theo blocked Sarah from taking her usual shortcut to the gym, making her late for the assembly, so that another guy would take her usual seat. She then had to contact Jesse, to take care of him, just when he was about to fart-box Luc and Theo, letting them escape their daily fart-boxing.

In "4 Out of 5 Dentists Prefer the Loop", Luc, in the form of a dentally hygenic robot, detected a cavity in her mouth and gave her hideous, disgusting braces. She was then unable to speak correctly.

In "Sickwich", she was infected with a disease, and blew her nose in Kelly's shirt, making Kelli jealous.

In "The Replacement", Luc and Theo were sick of Sarah getting all the attention, so they blamed Kelly and Kelli for something they didn't do, keeping them away from Sarah. Unfortunately, this plan backfired when Sarah manipulated Luc and Theo into following her orders through text, unconsentually dubbing them as her new lackeys. Kelly and Kelli became jealous of them stealing their role and there was a huge fight, over who would be Sarah's true minions, until Sarah finally settled the agreement, by enslaving all four of them. The next loop around, Luc and Theo realized how they just got played.

In "Sooper Loopers", Luc and Theo saved Sarah multiple times. They first stopped Lester from spilling his Frozey Freeze, keeping her from slipping in it. Later, they stopped a ladder from falling on her, Kelly, and Kelli. Later, they pushed her in the drop area of Coach Lessard's falling golfcart, just so they could push her out of there again, technically saving her.

In "Birthday Cake Island", Sarah was adoring Kyle on his birthday and sent him a linguistic text. Later, Theo hacked Sarah's phone, so they could tell Kelly and Kelli what to do. Theo demanded they tackle Jesse, but due to auto correct, he made them twirl him instead.

In "Port Fear", she got the hiccups, defaming herself in the twin community. Her allies left her, which was her worst fear coming true.

In "Jan-Itor-Nado", her neat freakiness was one upped by the new janitor, who erased her from existence.

In "Baby Daddy", she was adoring Theo in his baby form.

In "Wizard of Wacker Maze", she became an enemy in the video game.

In "11 Minutes to Lame", she started liking Luc and Theo, for becoming famous music stars.

Though Sarah falls into the "popular girl" archetype, she is actually very kind-hearted and friendly. Her hatred for Luc and Theo comes not from their unpopularity, but from their recklessness and destruction. She's a perfectionist and a neat freak. She is quick to anger when it comes to messes and disorder and has no tolerance for things even slightly out of place.

Sarah is completely dependent on Kelly and Kelli in order to communicate or get what she wants. She texts them everything she wants to say, so that they may be her mouthpieces. Though Kelly and Kelli both show equal worship for her and self-disrespect for themselves in turn, Sarah seems to prefer Kelly over Kelli and shows more appreciation and gratitude for her, leaving Kelli jealous and a bit pissed off.

In "The Replacements", she demonstrated how Kelly and Kelli were easily replaceable, and how she sees them as objects, rather than people. Shortly after learning of their absence, she didn't bat an eye and was quick to replace them with Luc and Theo, who both served the exact same purpose as the twins. The Twins still stayed loyal and faithful, and fouth Luc and Theo for the heart of Sarah, until she had an even more selfish idea, to take all four of them under her wing, making herself even more idolized.

Despite her aforementioned independence of The Twins, she took it as an extreme tragedy in "Port Fear", when they abandoned her and declared her to be uncool. Her deepest and most internalized fear was losing her popularity, which didn't happen when The Twins failed to show up in "The Replacements", which just shows how the pain came from her loss of following in general, and not specifically the fact that it was Kelly and Kelli who left her.

Sarah is madly in love with Kyle, adoring his perfections, and having high hopes for being his girlfriend, given how she's very well within his league. Kyle is probably one of the only people, who she doesn't see as lesser than herself. She would, however, be unhappy if Kyle had equal or more respect than her, shown in "The Replacements", where she had his spotlight turned off, during the play, so that he'd stop absorbing partial attention, and keep it all for herself.

Jesse is an ally of Sarah and a fellow member of the popular crowd. Whenever she has a problem that can only be solved with strength, or if she believes someone deserves a fart-boxing, she summons Jesse to take care of it for her. 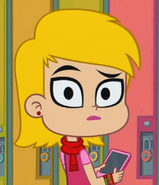 She brush her hair

I beg your pardon, Kind sir.

You're those two dorks, Luc and Theo! 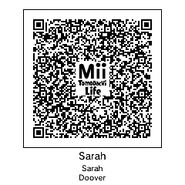 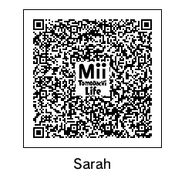 Sarah Doover QR Tomodachi
Add a photo to this gallery
Retrieved from "https://loopedtvshow.fandom.com/wiki/Sarah_Doover?oldid=7130"
Community content is available under CC-BY-SA unless otherwise noted.