Lester is a nerdy kid who likes to hide in his locker. He is voiced by Mark Edwards.

Although Lester acts like a nerd, he's very confident and believes himself to be superior. He prefers to lock himself in his school locker and play computer games. In the episode Larping in the Loop, he is shown to take part in larping (Live Action Role-Playing) with an alien race. In addition, he is a walking encyclopedia about science fiction and complex scientific concepts. If anyone is going to see through the time loop, it's Lester! 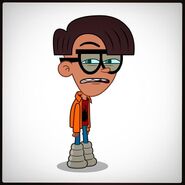 Add a photo to this gallery
Retrieved from "https://loopedtvshow.fandom.com/wiki/Lester?oldid=7107"
Community content is available under CC-BY-SA unless otherwise noted.