Kelly and Kelli, commonly known as The Twins are the loyal friends and vocal mouthpieces of Sarah, while she refrains from using her voice. They are both voiced by Stephanie Lynn Robinson.

The Twins are both completely identical. They are white, pale-skinned girls with black hair, worn in a ponytail with a purple ponytail holder. They have hoodies of the same shade of purple and leggings of a slightly lighter shade. They have red bracelets on their arms and black shoes.

Kelly and Kelli are the devoted, loyal, obedient lackeys of Sarah, adoring her every trait and idolizing her like a godess, and putting her needs before their own. Kelly seems to get slightly more respect than Kelli, much to her jealousy.

Kelly and Kelli are the dedicated, subserviant henchgirls of Sarah, who bend over backwards to serve her hand and foot. Their main role is to be the scribes that translate the unspoken word of Sarah to the others, filling in for her real voice, being quieted until it can be used for Friday's music preformance. Simply because she's gorgeous and popular, they idolize her like a goddess and will stop at nothing to tend to her every need, and protect her from all outside dangers of the real world. On their rare moments of being given their gratitude, Kelly usually has the upper hand over Kelli, since Sarah's prejudiced attitude leads her to prefer her over the latter. Not only does this make Kelli envy Kelly, but it also makes her beat herself up, believing herself to not be good enough to please her superior.

Sarah doesn't exactly praise them in response, and even Kelly is seen as pretty worthless and trivial to her life. If not for their exclusive service and pampering, Sarah would have no reason to be friends with the twins and would probably never interact with them. She likes them for the things they do to advantage her and not for their personalities, (of which they have very little substance to, outside of their praise for her anyway) meaning that if they were to ever wrong her or come up short, she would have them replaced in a heartbeat. This was demonstrated all the way in "The Replacements", Kelly and Kelli were replaced by Luc and Theo as Sarah's new henchmen. They were enraged by this and they bonded together to take them both down. Their passion in getting Sarah back was so strong, it was able to fuel their internalized supernatural powers, which they used to attack Luc and Theo. Sarah came up with the mischevious idea to settle the argument, by allowing all four of them to obey her. Sarah enjoyed this new special lifestyle, while Kelly and Kelli were oblivious to her blatant selfishness and saw this as a kind gesture of their behalf, simply giving both sides what they wanted.

Kelly and Kelli admire Kyle almost as much as Sarah. They have romantic interest in him, but they allow Sarah a better chance of being with him. If someone were to take second place for their most worshipped figure, the award would have to go to him, given how they shower him with compliments, give him constant critical acclaim, and avenge him, whenever someone harms him. For example: In "Dodge This", Kelly and Kelli were torn apart over Kyle's face being desecrated by Jesse's dodgeball storm, angering them into punishing Jesse with his own fart box.

Kelly and Kelli don't take too kindly to Luc and Theo, mainly because Sarah doesn't like them. Luc and Theo are some pretty clumsy, annoying, stupid people to them and they look down on them and try to avoid contact with them at all costs. They're pretty easygoing with them at first, but when Luc and Theo do something really destructive, they lose their tempers in a snap.

In "The Replacements", Luc and Theo replaced Kelly and Kelli as Sarah's slaves, which sparked an all new level of hatred between the two. Kelli and Kelli used supernatural powers to destroy Luc and Theo. 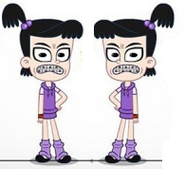 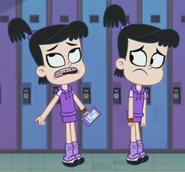 Add a photo to this gallery
Retrieved from "https://loopedtvshow.fandom.com/wiki/Kelly_and_Kelli?oldid=7010"
Community content is available under CC-BY-SA unless otherwise noted.