Jesse is the bully at Luc and Theo's school. He is a prolific dodgeball player at Lessard's dodgeball game, and attempts to throw dodgeballs at Luc and Theo every monday. He is voiced by Scott Gorman.

Jesse is the school bully. Every Monday, he goes through the same routine. In gym, he pummels Luc and Theo at dodgeball. At lunch, Luc spills his lunch on him, which earns him a fart-boxing, which happens just before assembly. After school, he works his job at the family business, Goulash burritos.

In "Dodge This", Luc and Theo grew weary of taking his dodgeball pummelings every day, so they calculated his every move and dodged all of his attacks, causing him to hit Kyle. He was hated by everyone and promptly fart-boxed. With every coming loop, he was replaced by another bully from another time period. Luc and Theo finally realized Jesse was the least terrible of them all and went back to the original Jesse again.

In "Theo Fly", Luc spilled his pizza on Jesse, earning him and Theo a fart-boxing. In other events, the Fly took on the form of Theo and got himself fart-boxed by mistake.

In "She's All Bot", Jesse was going to give Luc and Theo their daily fart-boxing, but Dragonface Pukebutt, calculated a way out of it, by making Sarah late for the school assembly, allowing another kid to take her spot, forcing her to summon Jesse to take care of it, meaning he'd have to attend to that more important matter, instead of fart-boxing Luc and Theo. However, a slight, but intentional miscalculation led Jesse to claim he only had time to fart-box one of them, and chose Theo for that.

In "Sickwich", Luc spilled his rotten sandwich on Jesse instead of the usual pizza. Jesse saw the sandwich as "environmentally friendly" and refused to fart-box him for it. When everyone else in the school later became zombified with a disease, Luc and Theo made the discovery that when one were to inhale Jesse's farts, it would end the cold and bring them back to normal. Jesse then farted into the school's air conditioning, polluting the air supply with his flatulence, curing the epidemic.

In "There's a New Principal in Town", Coach Lessard asked if anyone wanted to try out for badminton. Theo pointed to Mr. LemonJello, trying to advise him of how he was crushing him, but Lessard assumed he was pointing to another student. He went through the class, asking which specific student he meant. One of which was Jesse.

In "Getted Smart", Jesse was stressing out over his test, being too stupid to know how to do it.

In "Fart Busters", Luc and Theo were so fed up with Jesse's fart-boxing, that they decided to destroy his fart box every day. When they did, they released a bunch of fart ghost spirits into the world.

He is a large, extremely muscular boy with short spiky blue hair, black unibrow and wears black and white shirt with a skull on it, blue jeans and boots. 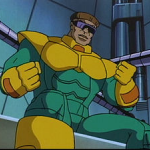 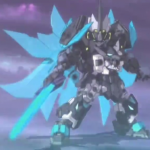 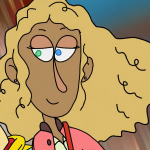