Jerry Rivers is a recurring character who first appears in Dodge This. He is the school news reporter at Port Doover Elementary.

In "Loop - There it is", Jerry Rivers did his news report on the tightening of a loose screw on the stature of Wilt Doover, which was very boring to Luc, Theo, and the entire school. Luc and Theo got the brilliant idea to hijack his show and do news reports on something fun, which was basically Luc doing stupid crap, while Jerry got tortured. Luc became the star and Theo became his agent. One Monday, Jerry waited out by the statue, telling Jeff to hold off on tightening the last screw, so that he could give it news coverage, but the news crew never came, and the statue's loop came off it's hinges and rolled rampant around town.

In "Reverse Mermaid", Jerry provided news coverage on Splash Hannah, really being a reverse mermaid. He was also almost run over and killed by Hector the Collector's car, when doing a report on the statue.

In "Fallout Room Boy", Jerry did a report on Port Doover, going into all-out chaos, over the second war between themselves and Birthday Cake Island.

In "Release the Krakenfoot", Jerry Rivers was previously watching a man serving ice cream through binoculars. He then provided news coverage on the escaped "Krakenfoot", and was later tranquilized by the Zookeeper.

In "Out of Time", he did a report on Baby Theo and the Giant Maggot flying away together, from the episode "Chick Magnet". McGal and Spritz assumed he was the one causing the loop, given that his day seemed pretty perfect, so he was the first framed person they threw into time jail.

In "Glitch Girl", he was the announcer for the girls rollerskating team, only to be rammed out of the room by his own nanny, for being a boy.

In "Part 2 of a Balanced Breakfast", Jerry recapped the previous episode and explained what the season finale had in store. 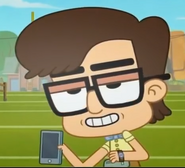 Add a photo to this gallery
Retrieved from "https://loopedtvshow.fandom.com/wiki/Jerry_Rivers?oldid=7108"
Community content is available under CC-BY-SA unless otherwise noted.