Barathamus "Barry" is a character. He first and only appears in the episode Re-Vamp. He is voiced by Brian Froud.

Barathamus was a supernatural vampire, immune to the loop. He toop advantage of the repetition by going around, sucking everyone's blood. One night, Luc walked through the park, defenseless, and was targeted by Barry. However, Luc had a special kind of blood that deprived vampires of their vampire abilities, forcing Barathamus to return to his human state.

Barry woke up the next Monday, in his own bed, now being controlled by the loop. He was quick to notice this, due to him being a vampire before the loop, and he ran around town, looking for the person who stole his powers. When he found Luc, he was in despiration and begged him to return his powers, but Luc had no way of doing so.

Luc tried to help Barry become friends with people at school, but he was such an awkward creep-o, he had no way of doing that. When they came across Amy, she knew all about the vampires of Port Doover and guided them to her friend Virginia, a little vampire girl who she babysits from time to time. When Barry asked Virginia to vampify him, she refused, because now that she was the only vampire in Port Doover, she was in full control.

Luc, Theo, and Amy convinced Virginia to give Barry his powers back, by letting her meet Turk Parfait, who she then devoured whole. She gave Barry his powers back, but shortly afterwards, Luc spilled the beans about having de-vamping blood, meaning that she and Barry would have to kill him. They chased him through Port Doover, until they were caught in the blinding light of Kyle Bush's shimmering teeth, which killed them. Due to them technically being "supernatural", this death was irreversable and because of this, they'd never return to Port Doover again.

He is slightly obese with curly black hair and stubble. He wears a blue shirt with light blue collar, brown pants and purple shoes. 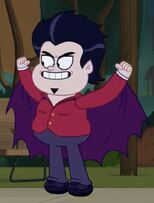 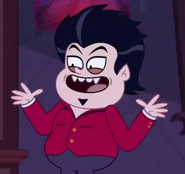 Barry's evil laugh
Add a photo to this gallery
Retrieved from "https://loopedtvshow.fandom.com/wiki/Barry?oldid=6802"
Community content is available under CC-BY-SA unless otherwise noted.