Edit
watch 01:36
We're Getting Mutants in the MCU - The Loop
Do you like this video?
Play Sound

Luc Maxwell
Theo Merton Jr.
Aliana's Father is the unnamed father of Aliana and the leader of the Alien Federation. He is an alien, known as a Zerm, who comes to Earth with Lester, to larp with him and other nerds, reenacting an interplanetary war between the Zerms and Humans. He first appeared in "Larping in the Loop".

In "Larping in the Loop", Aliana's father was part of a war reenactment with the humans, with both of them playing each other's roles. In attempt to impress Aliana, Luc derailed from the story and won the game, which angered her father for being "historically inaccurate". Aliana's father revealed his true identity and threatened to destroy the Earth for what he did. However, Aliana convinced him that because he loved her for her true self, he should not destroy them. He couldn't say "no" to his daughter and so he forgave the humans and let them live.

In "Space Burrito", Aliana's father tried sending out some of his men to get Goulash taco sauce, to fuel their spaceship, only to find out that Luc ate all of it. The brought Luc into his lab, where he and Aliana planned to dissect him. Theo convinced the aliens to instead let them make more Goulash sauce, instead of taking it out of Luc. They gave them until the end of the day to do so, while holding Luc hostage. When they returned, he approved, leaving them again and allowing Luc to live.

In "Rocket to Tomorrow", Luc and Theo proved to Lester that they knew about his integallactic knowledge, by mentioning the larping aliens he role played with. 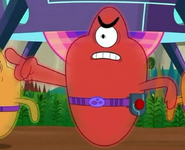